OK so finally here I am posting pics of our kitchen remodel. It has been almost finished for a while but I wanted to get it properly sorted before I took photos. Then I had to wait until I had freshly cleaned it and the weather was nice and bright enough to get some decent pics.

This is how my kitchen used to look, you can see more pics on this blog post I wrote here

These original units sold to a lady on the south coast who also bought all the unrestored ones that we had hoarded away. I’m so glad that they went to a good home. It’s funny how you can get emotionally attached to things. I always cry when we sell a car – I didn’t actually go that far with the kitchen but I was sad to see them go.

I started looking online when I read somewhere that a lot of people sell entire kitchens second hand, appliances and all. I browsed EBay looking at the sort of thing that was available, and after a while Al (my husband) got involved. He is very practical and can usually foresee any potential issues with this sort of thing and I’m sure at the back of his mind he was thinking since he would be sorting out any problems that would occur he might as well get involved from the start.

After seeing a few mid-century kitchens like these   https://pin.it/2h9yRis   on Pinterest in dark wood I came across something similar for sale on Ebay but when we looked into it, it was too far away and the cupboard configuration wouldn’t have worked in our space, but by then I was sold on a Mid century walnut and stainless steel look. I thought it would also still work with the black and white floor tiles and our trusty old 1950s dinette set.

Eventually a kitchen that we liked came up in Stanmore which isn’t very far from us and there were a huge amount of units included, so we went to have a look.

They were filthy because the sellers were really knocking their house around but they were fantastic quality. The main thing to consider when buying a second hand kitchen like this is that the seller will more often than not want you to remove it yourself, which sounds easy but is far from it.

We managed to strike a deal and arranged to book a van and remove it over the Easter weekend. To say it was hard work is an enormous understatement. The family were still living in the house and we literally had 2 days before the builders were taking the ceilings down. But we managed it between the two of us. I’m not sure how, but we did. The worst part was that it had 6m of granite worktop which was beautiful but so incredibly heavy. I could not comprehend how it could weigh so much. The worktop wasn’t going to work for us due to where the sink had been cut but we wanted to take it to sell on and offset some of the other expenses.

Once we managed to get it all home and safely stored in the garage the stress was temporarily over. We had a bit of breathing space to work out what would fit where and how and what else we needed to buy to make it all work.

Once we had worked out exactly which units we would be using I set to work on cleaning them up – mostly it was just plaster which washed off relatively easily.

We worked out roughly where everything would go and we knew we would need all the electrics moving. Plus my oven was gas and I wanted an electric one so we had gas that needed capping off. Our usual electrician was booked up for weeks but we had a recommendation from a friend and after a few quotes from different people we went with our friends’ recommendation. This didn’t exactly work out how I’d expected. We had to get all the units in place to work out where all the electric sockets and appliance wiring needed to go, the electrician had to come and rout the walls out and get all the basic cabling in place then we had to get the units installed so he could come back and wire the appliances. It was a nightmare of juggling. At the same time as all that we were trying to refinish walls and get them painted. We lived on microwave meals and washed up in a bowl in the bath.

These photos were taken at the end of the day once we had cleaned up. It was incredibly dusty work. You can see where the electrician had to cut out channels to fit the new wiring into and despite having dust sheets everywhere the dust went right through the house and lasted for weeks.

Once we had managed to get the walls smooth and a few coats of paint on, it did start to feel a bit more manageable and it also started to get less dusty.. We were also moving the position of the sink so the plumbing had to be altered. You can see here that we had got the extractor pipe fitted too by this point.

Once the oven, hob, sink and dishwasher were in it was much easier to cope with. The worktop was also a nightmare – we managed to find a white one with metallic flecks which fits quite well with the retro vibe but it was also heavy and awkward to manoeuvre. The fridge was one of the first things we bought, in fact that came before the units. It was bought second hand and locally and weighs a ton. My neighbour has a van and collected it for me but when it arrived it wouldn’t go through our kitchen door! It had to sit on the patio for a night and Al took the doors off to get it inside. I’m so pleased with it, I always wanted a side by side fridge and the water filter and ice maker are just fantastic. The dishwasher, double oven, extractor and hob were all bought second hand. We had the stainless steel splashbacks made to fit and the same company also made a stainless door for the dishwasher.

All that remained then was to sort out all the finishing touches. I managed to find these walnut laminated shelves for the wall next to the door to display my plants and other vintage bits and pieces. To finish it off we mounted this clock which was a wedding present 25 years ago from some dear friends. Perfect.

Now I just need a blind. We had a vertical louvre blind before and I was hoping to have something different this time but as yet I’ve drawn a blank as to an alternative. I don’t really want a roller blind since one half of the door opens. I did think I’d found the perfect thing when I found perfect fit conservatory blinds that fit into the actual frame but they won’t work with our door sadly. So it looks as if it will be another vertical blind. I do like the fact that I can either draw them completely back or completely close them and tilt them to shade the sun. We do get bright sun in our kitchen which is lovely but can sometimes be a bit much.

We are also going to mount a big frame on the wall above the radiator when we find the time.

It was very hard work but now it’s finished I’m so pleased with it. It seems so much easier to keep clean than my old kitchen and it’s so nice to have soft closing drawers and doors.

We managed to sell off most of what we didn’t use, the granite worktops went as did a few other bits and pieces and once we factored in what we made on the English Rose, it came out virtually cost neutral plus we saved a fair bit of stuff from landfill so wins all round. 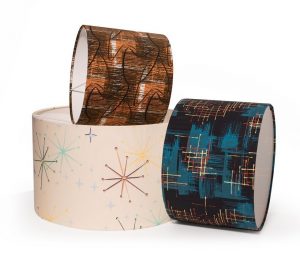 I don’t often remember to mention the fact that I also sell lampshades made using my fabrics. The ones shown on my website all feature my first collection of dress fabrics and are all still available to buy but I have just made a few samples in my new interior weight fabrics. Since these fabrics… 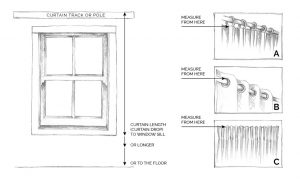 Before you start measuring your windows for curtain fabric you need to decide on a few things: Do you have a curtain pole or track already fitted? Will the curtains hang inside or outside the window frame? How long do you want the curtains to hang? Generally about 10cm (or 4”) below the window is… 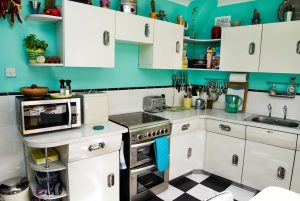 I thought this month I’d share some photos of my English Rose kitchen. I shared some of my bathroom when we decorated it a few months back so this completes the story. When we moved into our house in 1995 (the days before Ebay and the Internet) there used to be a free ads paper… 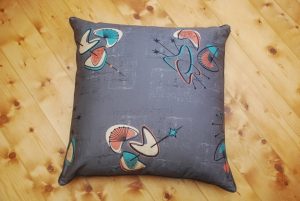 I’ve recently been playing around in my head with new product ideas, one of which is roller blinds which will be coming to my shop very soon. If you haven’t seen my recent Instagram and Facebook posts showing my colour tests have a look and I’d love it if you let me know what you… 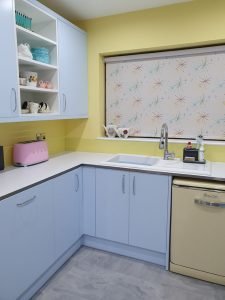 You may already have seen these gorgeous photos on my social media but they are so amazing I think they are worth their own blogpost. Way back in August we had a message from a lovely lady Helene at Revival Vintage. (Click here to visit their website.) She was redoing her kitchen and was interested… 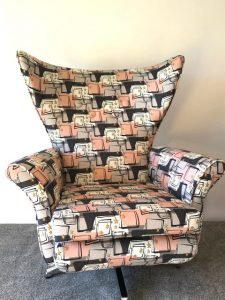 Recently I was approached by an upholsterer from Suffolk, the beautiful next door county to my home county of Norfolk. She was interested in purchasing my Starlight fabric to reupholster a 1970s Gplan style chair. I watched her Instagram account in anticipation, and was completely blown away by the end result. Nicky very kindly sent…