This has been the scariest project I have undertaken on my sewing journey.

I cannot deny I was really nervous about it, and for those of you who follow me on social Media you will already know that the buttonholes spooked the hell out of me!

I do love a coat with a hood. I also love wool coats, and I had been looking for a vintage wool coat with a hood for months. I had scoured Etsy, Ebay and various vintage clothing groups but could not find what I wanted. Then I had the idea of trying to sew one myself.

I had inherited several lengths of wool which would be suitable so if I messed it up it wouldn’t cost me a fortune so I set to work looking for a pattern that took my fancy.

The one I settled on was the Wearing History 1930s Blanket Coat. Link here 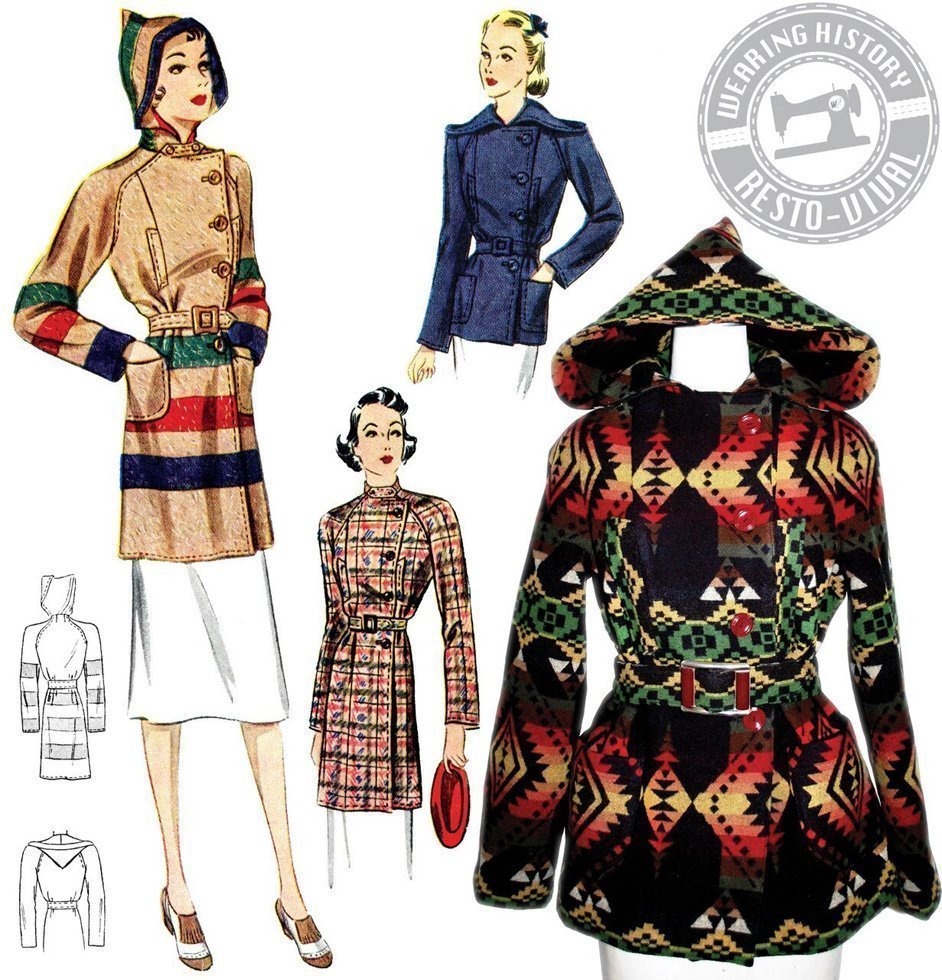 It appears to be out of stock at the moment. I actually ordered the print yourself download version. It took me quite a while to cut and tape it all together but wasn’t actually difficult. My top tip is that it’s much easier if you have a tape dispenser to you can just pull and cut the tape one handed.

There is a short below the hip version and a longer version, and it can be made either with or without a collar. It is also belted – I do like a coat with a belt but more on that later. 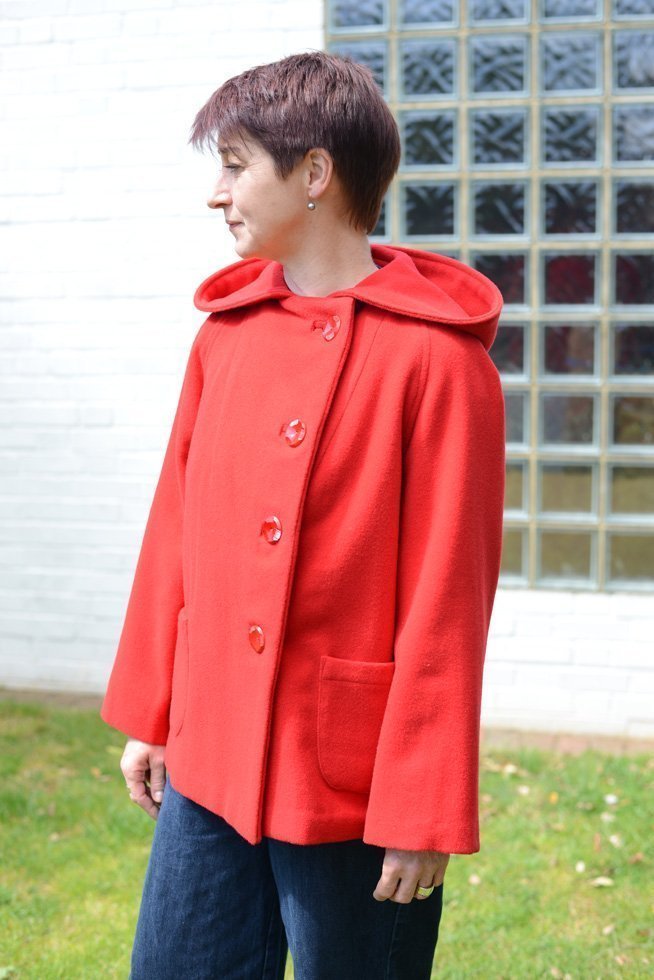 In general I didn’t find it too difficult. I read and re-read the pattern several times before starting to sew although this doesn’t always help me! I often find that pattern instructions don’t always make sense until I’ve got the actual project in front of me. It all came together fairly quickly and the only bit that concerned me was the front hand warmer pockets, This was because I was nervous about having to cut into the front coat fabric to insert the welt.  I read a review by someone else who had made the pattern and they actually omitted those pockets, so I decided to err on the side of caution and did the same.

The one main thing I regret is not making the decision on what buttonholes I was going to make at an earlier stage of the proceedings. I actually had the coat finished, lining and all before I considered the buttonholes. After doing some research I made quite a few practice versions on spare fabric and decided that I really, really wanted to do bound buttonholes, something I’ve never attempted before. 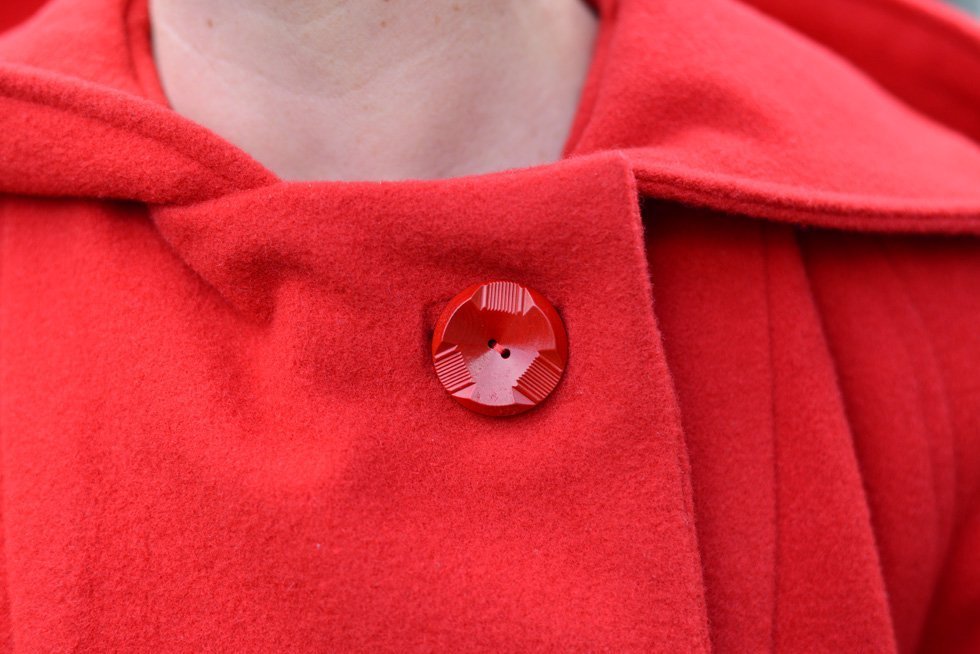 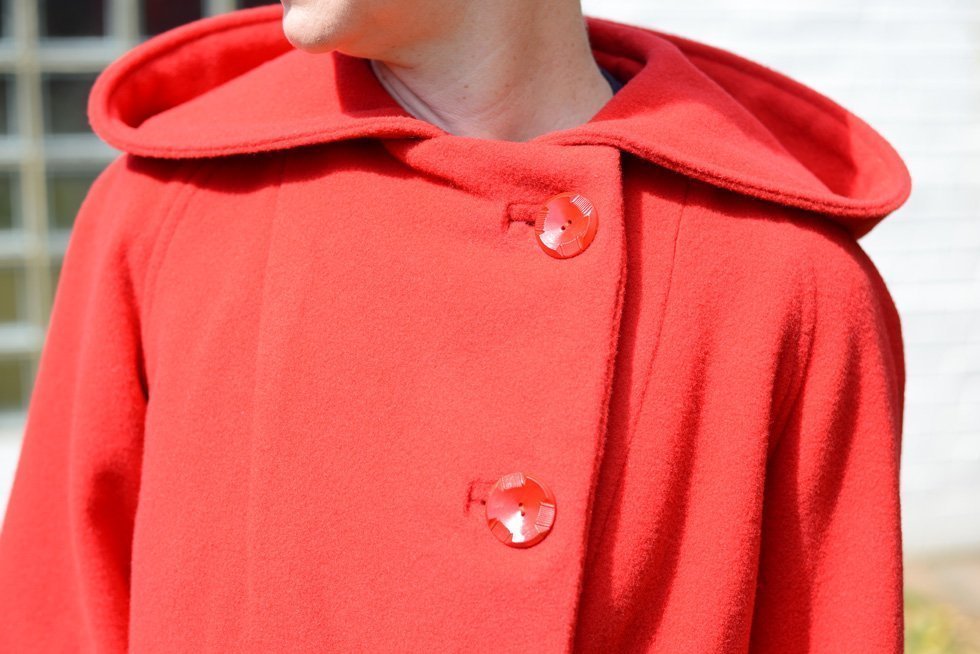 This was a pain because I’d already lined the coat so had to unpick the lining and also the front facing to be able to make bound buttonholes. I was rather worried that I wouldn’t be able to cut the holes through both the main coat fabric and the facing in the correct places so they laid flat when finished but somehow it all came together. 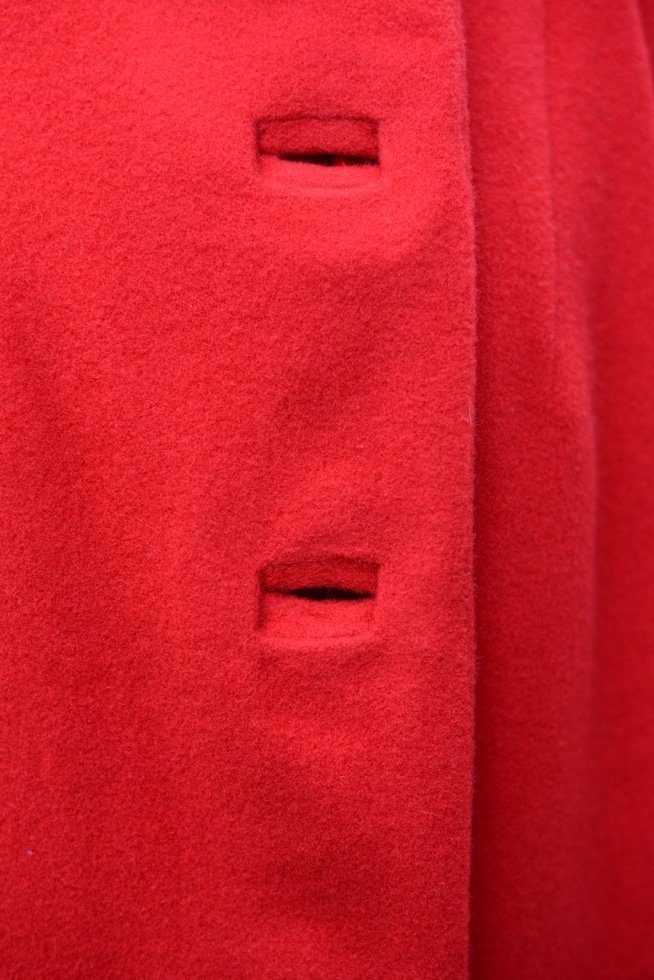 You can see from this photo that the third buttonhole down (bottom one on this photo) is not very well balanced but that can’t really be seen when the coat is buttoned up. Overall I’m fairly happy with the way they turned out for a first attempt. I think they would be much easier on a lighter weight fabric.

Luckily when I re-stitched the facing and the lining it all went together well. Phew.

I also searched high and low for a vintage red buckle that would be deep enough and large enough for the belt and found a beauty from www.theswagmansdaughtercom which you may also have seen on my Instagram. However when I put the belt around the coat it feels too bulky around my waist – I will keep the belt, in fact I should have taken some photos with it as well. I think I like it more without it though.

Buttons as always from the vintage button lady from Spitalfields Thursday market.

I love the pointy hood. My daughters laugh at me and think I look like a pixie,

I’ll leave you with that thought… 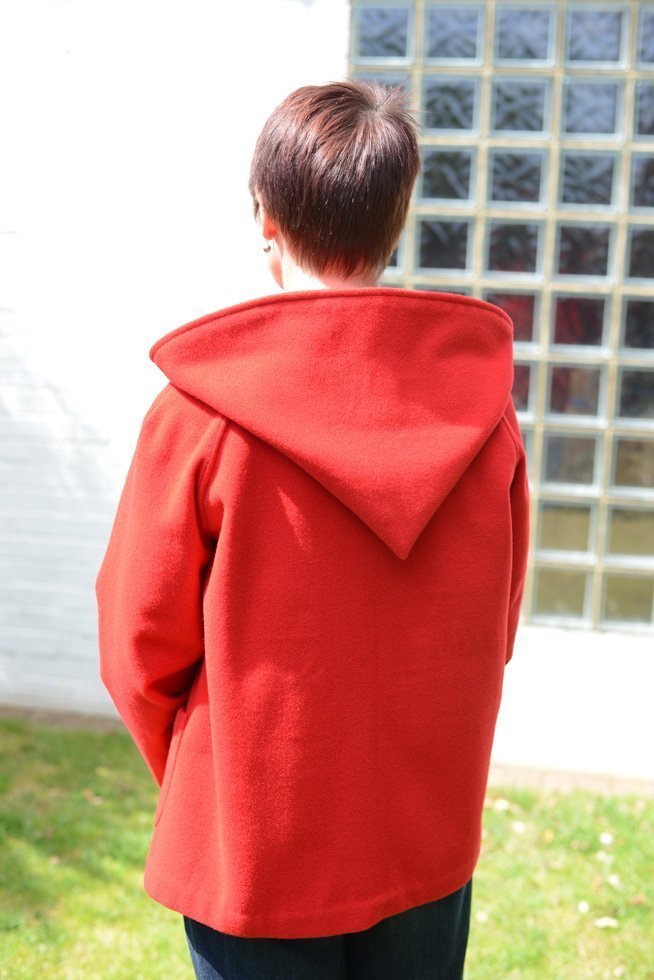 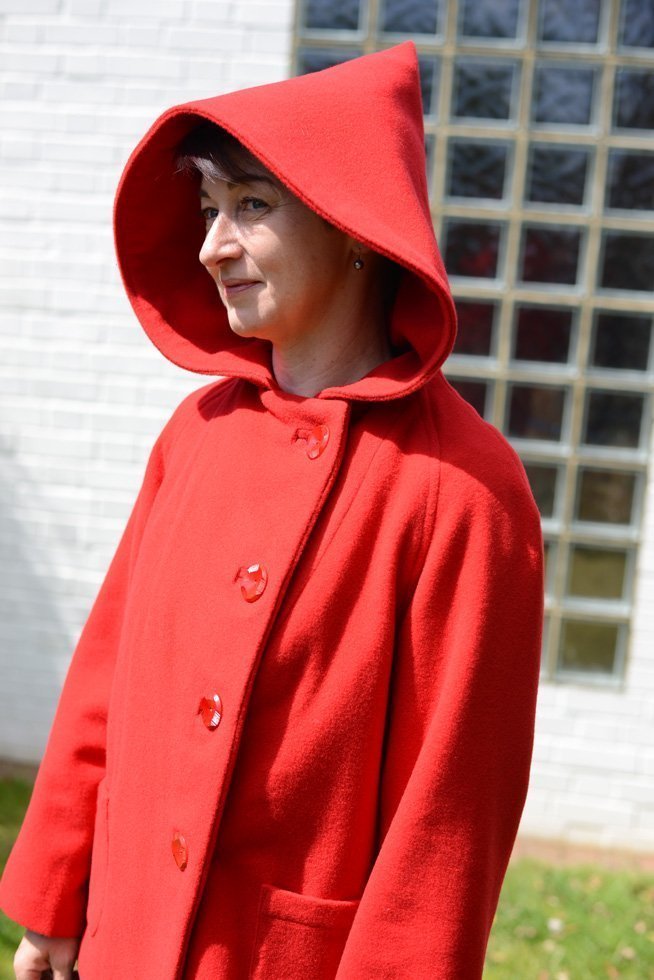 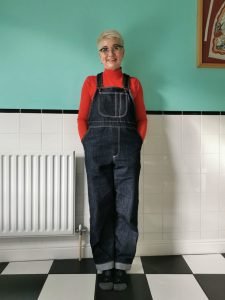 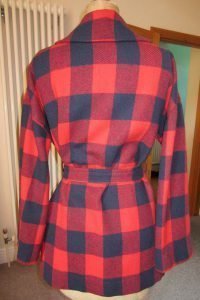 This post is long overdue. I actually relined this coat about a year ago, took photos and meant to write a post on it straight away, but as with a lot of things I didn’t find the time. It has sat on my to-do list for the last year but finally here goes. I absolutely… 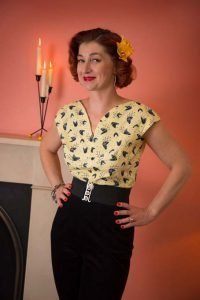 Way back on the 9th October last year I posted on my Facebook page that I’d blog about the garments I made with my 20th Century Cloth fabric. Well 3 months on and here I am, finally! I am struggling with finding time to keep up with the social media side of running a business… 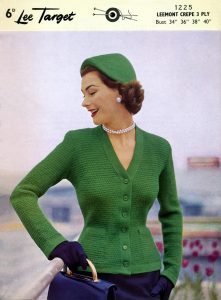 Sometimes I struggle to find ideas to share in my blog posts (and social media in general) I tend to save interesting bits and pieces as I go about my week but occasionally I find I haven’t got anything that I want to write about. That happened this week but as I was searching through… 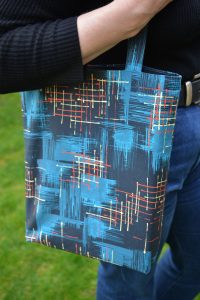 This bag is big enough to hold a couple of A4 folders and to fit comfortably over your shoulder, but you can make it any size with straps any length you wish (just make sure you cut the two main bag pieces and the two lining pieces all the same size) For this size you… 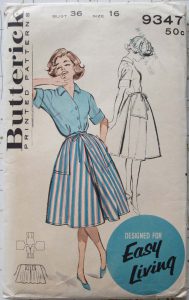 The second garment I made was a skirt from the Butterick 9347 pattern. I was still trying to keep things simple (didn’t want to jump into anything too complicated too soon!) and this was basically a wrap-around skirt with a tie waist. As an added bonus it had lovely big pockets too, I love big…